Warlock class is great for consistently dealing damage while staying away from the melee range. It has three specs and each one specializes in ranged DPS. Namely, the first spec is Affliction, the second one is destruction and the last one is Demonology.  If you were looking for a pure DPS class then warlock should be your go-to.

In demonology spec, you deal damage by summoning demons after specified intervals. Some players are confused about whether to use Wrathguard or Felguard. We will be going over a few differences to help you make an informed decision.

Wrathguard is a demon pet that you can summon only as a demonology spec warlock. It can help you a lot in PvE but as far as PvP is concerned players are not very fond of it. When you switch your Felguard to Wrathguard it replaces two abilities. Previous legion strike ability is replaced by Mortal Cleave and Felstorm is replaced by wrath storm.

Wrath storm is an area effect attack in which your minion will swing the weapon to damage all targets that are present near him. It will deal damage with 33 percent of your total attack power and your minion won’t be able to use any other abilities while using this attack. The range of this ability is around 8 yards.

Most of the players choose this minion because of the better character design and dual-wielding ability which did more damage as compared to Felguard. However, this ability was later removed from the game which made a lot of players unhappy.

Felguard is also a minion you can summon as a demonology warlock. It is summoned by using the “summon Felguard” skill. Even though the Blizzard team mentioned that Felguard will be powerful, its performance has left players unhappy. It has around 400k points on the health pool which is not a lot. Also, the damage potential is low to average.

Overall utility wise it does not contribute that much and unless your gear is overpowered you can’t get much value out of this pet. Some players often call it one of the worst pets in-game. But all that depends on your skill level. There have been some players that were putting out huge numbers on the damage meters using Felguard.

One more aspect is that the character design also doesn’t look that intimidating. The two abilities that differ from Wrathguard are Felstorm and Legion strike. Felstorm can prove to be quite useful in some situations for clearing out mobs. If you’re just a casual player looking to PvE then both of these minions can perform quite well. So, you’re free to choose whichever one you like better. 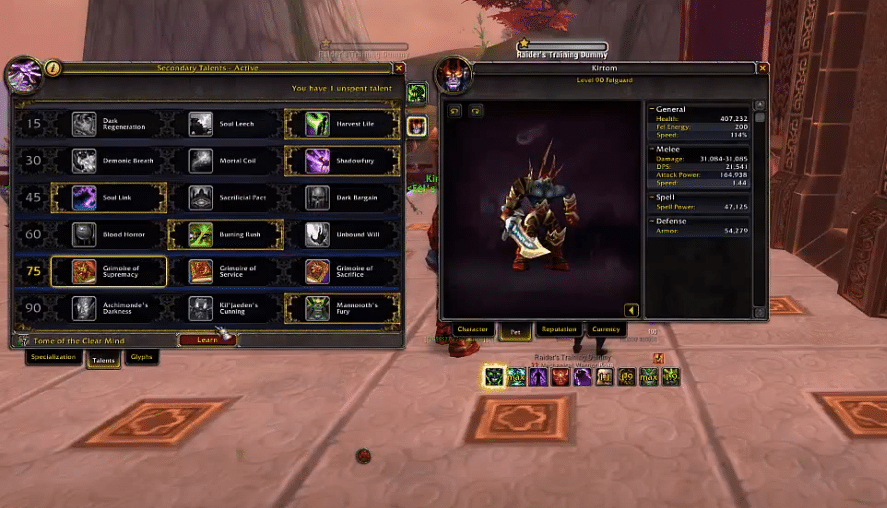