There are so many ways you can customize your character, depending upon what your playstyle is. You can have different talents, different skills tied to your character. However, if you want to make your character OP you have to read through a lot of guides and learn what gear path you should follow, or you can just ask an experienced player from your guild to guide you.

In this article, we will be going over some differences between Fallen Crusader and Stoneskin Gargoyle to help you maximize your DPS in the world of warcraft.

Rune of fallen crusader can be applied to your weapon to give you a huge damage buff. It is widely recommended by most players to go for this rune every single time if you’re using a dark knight. All the buffs resonate with the base abilities of the Dark knight.

It takes about 5 seconds to cast and is only useable for Dark knight class. After you engrave this rune onto your weapon you have a chance to get healed for about 6 percent of your total hp. This can prove to be very helpful to increase your sustain and help you win more fights solo.

Another ability you get through the rune of the fallen crusader is around a 15 percent increase in your total strength that lasts for fifteen seconds. It can exponentially increase your DPS and is used to quickly burst down the enemy. Almost all the high-ranking players will recommend you to choose this rune over stone skin. So, if you want to see high numbers on the damage meter then we recommend that you go for the Rune of Fallen Crusader as well.

The only area in which the Stoneskin gargoyle is viable is when your gear is not good enough and you want to increase the defensive abilities of your character. This rune does not support aggressive playstyle which is one of the reasons why it is not liked by the community. You can ask any experienced player in-game and you’ll find that most of them are using the rune of Fallen crusader over Stoneskin Gargoyle.

Just like the fallen crusader this rune also has a 5 second cast time. When you engrave it onto your weapon your armor increases by 5 percent this will improve your survivability and you won’t die to a quick burst of incoming damage. This rune also increases all of your other stats by 5 percent which sounds good but it still can’t match the utility provided by the Fallen Crusader.

If you’re looking to completing the end game content then it is likely that you will have to switch to the rune of the fallen crusader. But if your main focus is not to deal damage and you’re looking to increase the tanking ability of your character then Stoneskin Gargoyle might just be the right option for you. If your gear is of a high enough rank then that additional 5 percent increase on all stats can add up to a lot. 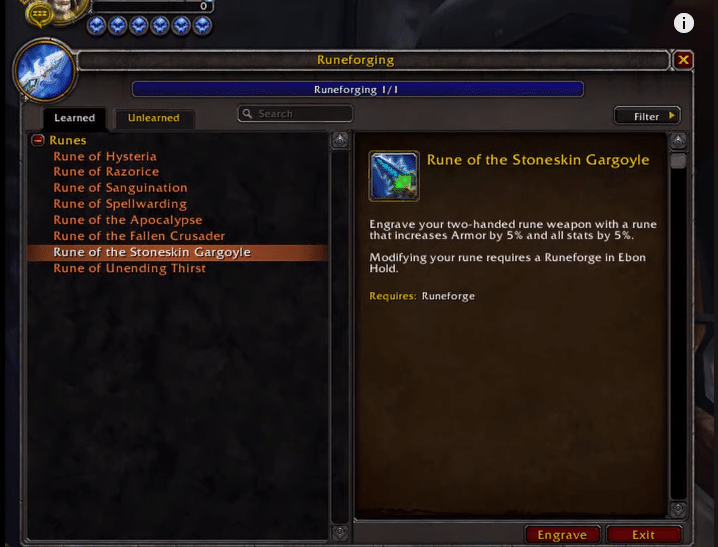