Over the past few years, World of Warcraft has had multiple expansions. World of Warcraft Legion is one of the most recent ones to be released. The expansion had a lot in store for other players. A whole new world called the Broken Isles was also made available to the player.

Broken Isles is a brand-new area that can be discovered using the WoW Legion expansion. It brings in newer content for the players to enjoy as well as a unique questline, dungeons and class halls. Unfortunately, many players don’t have much idea on how they can actually get to the area.

The reason behind it is because there’s actually a number of things that a player must do before getting access to the region. The game does not really tell the player how exactly he can do so. In case you are also one of these players and don’t have much idea on how you can get there yourself, then no need to worry!

Today, we will be telling you precisely how you can get to the Broken Isles in WoW’s Legion expansion. So, without wasting any time further, let’s get started!

How to Get to The Broken Isles?

Gaining access to the Broken Isles isn’t necessarily hard. You will have to start by following the main Legion questline. As you progress the questline, you should be able to get the chance to play out the Broken Shore situation.

You will have to keep on following the objectives until you eventually get the chance to get to Dalaran. Likewise, keep on progressing. At one point, Dalaran will be moved all the way to the Broken Isles, taking you along with it. As soon as you complete this quest, you will have reached the expansions, brand new area.

Now, an envoy should greet you close to Krasus’ Landing, which will then be accompanied by a courier that will instruct you how you can find your class hall.

However, what you are truly looking for is a Dalaran Hearthstone. Having the item should help you easily get to the Broken Isles without any kind of problem. As we have also seen plenty of players having issues with starting the Legion questline, or getting on the ship. If you already have the Dalaran Hearthstone, you can straight up skip all of this.

The good news is that if you have previously cleared the Broken Shore story, and have received the Dalaran Hearthstone, you won’t have to do it all again with another character. As a matter of fact, the quest needs to be completed using at least one character. Afterward, you should have access to Hearthstone with any other character that you make which can be used to gain access to the Broken Isles.

Another thing to note in case you can’t seem to get on the ship is to continue on the track trivial quests. An NPC should give you the quest. Most players don’t know this, but you can actually right click your tracking icon on the mini-map, and then make “Trivial Quests” appear which should then show you the Legion quests.

Getting to Dalaran In The Broken Isles Through Stormwind

At the start of the first few Legion quests, you should be able to locate a mage that can open a portal to Dalaran Broken Isles in Stormwind Harbor. He is found on the top of the stairs that lead from the docks to the city (next to the lion statue).

Later, you should also find a portal in the Stormwind Keep.

Getting to Dalaran in Broken Isles Through Orgrimmar

There’s a portal that can be found in the Cleft of Shadow (located between Valley of Strength and Valley of Spirits). The portal will lead you straight to Dalaran in the Broken Isles. 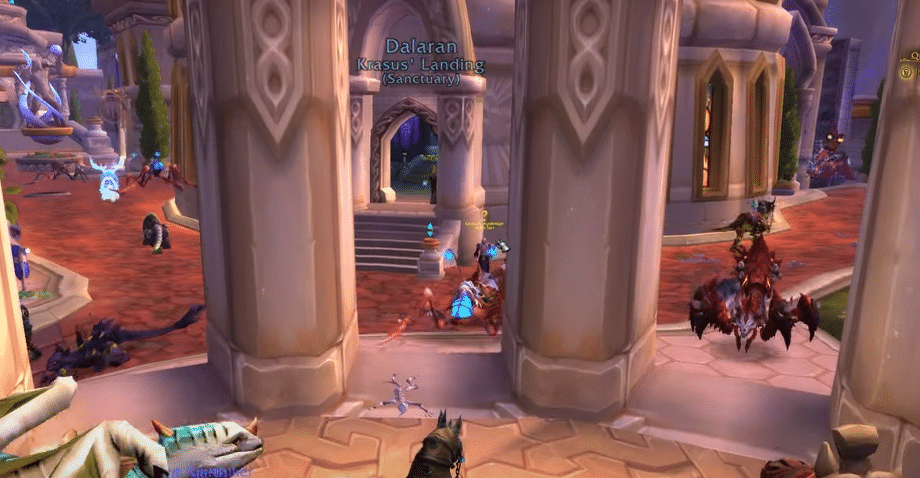