One very popular piece of equipment out there which has become a major part of most gaming setups nowadays is a great microphone. While they may not be a part of the average gaming setup, a lot of people, and especially those who like to stream video games to other people.

Even if you don’t use them for these things, the handy devices are very useful for interviews, podcasts, and more things of the sort. But one very important thing to keep in mind while getting one of them is that it is only worth it to invest in high-end microphones.

This is especially true if you’re looking to purchase one for professional purposes like podcasts, video game streaming, etc. Two great examples of high-end microphones would be the Razer Seiren and Razer Blue Yeti. Both of these are great devices in their own way and are worth getting because of different reasons.

But since users can only use one at a time, a choice between the two certainly has to be made. That said, this choice definitely isn’t an easy one, which is why our Razer Seiren vs Blue Yeti comparison given below should be able to help users out.

The max SPL of a microphone, referred to as the maximum sound pressure level in more defined terms is easily one of the most important aspects of the device. For those that aren’t too familiar with mics, the max SPL of a device such as this can simply be defined as the maximum level of sound that a microphone can easily take before there are distortion and crackling sounds in the recording. Luckily, both the Razer Seiren and Blue Yeti are very good in this specific regard. One important thing to remember is that while both of their maximum sound pressure level is listed to be identical.

Both are considered to have 120dB maximum SPL, meaning you would expect them to be the same in this regard. But, that isn’t the case based on our experience with both products. The Razer Blue Yeti actually manages to record sounds a little higher than this supposed limit before any form of distortion can be noticed in recordings. On the other hand, the Razer Seiren begins to crackle and form distortions in audio just before the supposed 120dB limit is even reached. This isn’t too bad, since the actual limit is still very high and perfect for use in most situations.

The response rate of a microphone is another very important thing that is worth comparing, especially because of how different both the products are in this regard. If users aren’t familiar with this aspect of microphones either, we’ve got a simple enough way to define it. The response rate is basically a spec of a mic that tells users how good it is at capturing different frequencies, making distinctions between specific sounds, and providing a very nice, natural, and pleasant audio texture. This makes all recordings sound great or bad depending on how good or bad the response rate is.

That said, the Razer Blue Yeti certainly has a very decent response rate of exactly 48KHz. While this is certainly quite good, it is completely outshined and overthrown by the amazing response rate of the Razer Seiren which is a highly impressive 192KHz. This means that it is capable of providing some of the highest quality audio files with an all-natural and smooth sound. While this is certainly a huge advantage, there is one big disadvantage that follows with it as well. This is discussed in more detail below. Keep in mind that this is different from the Frequency Response Rate, which is 20 Hz to 20 Hz for both devices.

The simplest way to define the sample rate of a microphone would be to say that it’s the audio samples per second, measured with KHz, that the device can record. Whenever you record anything with products of this kind, whether it only be an audio file or audio along with the video, the quality and kind of sound will obviously affect the size of the file as it is stored and uploaded to different places. This means that while it is quite a good thing that the Razer Seiren has such great response rates in most cases, this is certainly not one of these cases.

The sample rate of recordings from this microphone will be taking quite a huge toll on the device to which you upload it, so definitely keep that in mind. That’s because computers and/or other devices won’t be able to make the most out of the Razer Seiren if they don’t have great storage capacity. As for the Razer Blue Yeti, its sample rate is a lot more controlled and smaller than that of its counterpart, which is obviously a great thing since it won’t eat away all the free memory a user’s device has.

The last comparison between the two which we’ll be discussing is regarding the aspect of polar patterns, otherwise referred to as recording patterns by some. This is the term used to describe which patterns the microphone is capable of picking up sounds in, along with the exact directions on which it diverts most of its resources. This is a very handy feature to have when it comes to canceling out unwanted noises in the background and making sure that your mic only focuses on you or a specific someone. 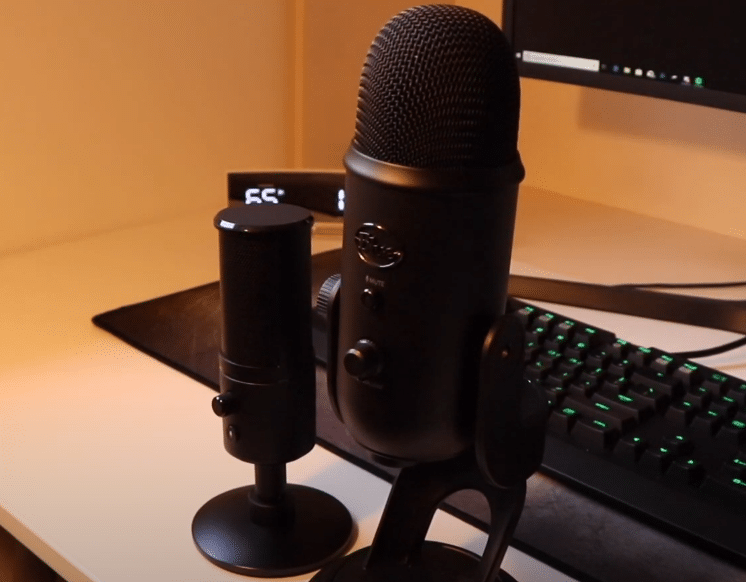