The second expansion for World of Warcraft was none other than WoW: Wrath of the Lich King. Many players today consider it one of the best expansions that the game has gotten, whether it be for the great regions or the nostalgic aspect of it. To finally defeat the main antagonist of the expansion, which is the Lich King himself, players need to teleport to his location after completing a series of objectives.

This teleporter pad that brings players to his location sometimes doesn’t work. This is usually a player-related issue and not an error with the game itself. If you’re encountering this issue, here’s how can easily fix it.

How to Solve Lich King Teleport Not Working in WoW?

The reason why a lot of players are unable to teleport to the location of the Lich King in WoW is that they don’t have the right amount of players for the quest. There is a specific number of users required in a specific location to actually start the battle with the Lich King.

This specific amount of players, which is usually 25 excluding your own character, must be in the Icecrown Citadel Raid instance at one time. Once this is done, the battle can properly start and you can all teleport to the location to finally engage in battle with the Lich King. That is, as long as your group of users have completed the necessary tasks before this, which brings us to our next solution.

On the path to fight the Lich King, players will have to encounter several different major enemies and engage with them in boss fights. There are a total 12 of these different boss fights, and 10 of them are compulsory to clear. That’s because the teleporter pad that brings you to the location of the Lich King doesn’t start to work until you’ve finally beaten them.

All of these different boss fights are very fun in their own way, which is why clearing all of them doesn’t feel like a chore in any way. Use your raid lockout to make sure you’ve dealt with all 10 compulsory enemies so that the teleported can finally light up and start working. Just check any official World of Warcraft page to find out exactly which specific boss fights you need to clear, and which two you can skip.

There are actually multiple different teleporter pads in the area, and it is possible that you’re using the wrong one. This is a common mistake, as lots of players step up to the wrong teleporter. The correct one is the pad that’s located in the center of the room in the Upper Spire. The rest are unrelated to the quest and won’t work regardless of what you do. If you’ve made sure that the previous two reasons weren’t the problem, this one is surely the case. 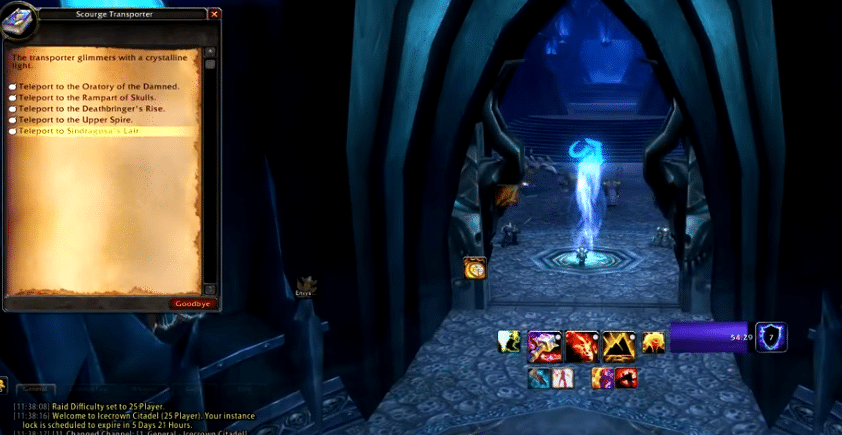