The Ironbarb Skyreaver is a boss that can be encountered by players in the Upper Blackrock Spire. The boss isn’t that difficult to get the better of most of the time, yet it is still known throughout the WoW fandom for being impossible to kill at times.

This is meant in a very literal way, as the Ironbarb Skyreaver sometimes doesn’t die at all and keeps getting stuck at 1 HP even if players continue to fight him for hours on end. If you encounter a similar bug in World of Warcraft that is causing the Ironbarb Skyreaver to not die, given below are a few solutions that should help.

In the build-up to this encounter, players will be able to fight hordes of different enemies. These enemies will include lots of different mobs, including the small bats. These are small and pesky little creatures that aren’t that difficult to deal with. However, they are annoying for one other reason. This reason is that these small bats can sometimes be very easy to miss.

When players miss them and don’t get rid of them before moving on to the next encounter, there can be problems with the game. The Ironbarb Skyreaver not dying in WoW is likely one of these problems, as the boss fight bugs out since you didn’t exactly completely clear the previous encounters. The solution would be to leave the instance and going back to kill every small bat that players missed before coming back and trying to kill the boss once more.

One of the main solutions for this problem which tends to work for a lot of players is simply leaving the instance of the boss fight and coming back only a few moments later. But, there are a couple of specific conditions which need to be met for this specific solution. The first condition is that players must ensure they’ve killed every enemy leading up to this encounter with the Ironbarb Skyreaver, as discussed in the first solution.

The second condition that must be met before leaving the instance is that the Ironbarb Skyreaver’s health must be at 1 HP exactly. It should be right at the point where it stops depleting regardless of how many players attack it. Once this point is reached, just leave the instance for a few seconds and enter it once again. The boss should either not be there, or it should be easily defeated without any bugs this time around.

Lastly, another solution would be to quit the scenario altogether and then log out of the game. If the previous two fixes did not work, we recommend that you step out of the instance and stay away. Log out of the game and get back into it shortly after. Now try defeating the Ironbarb Skyreaver again. 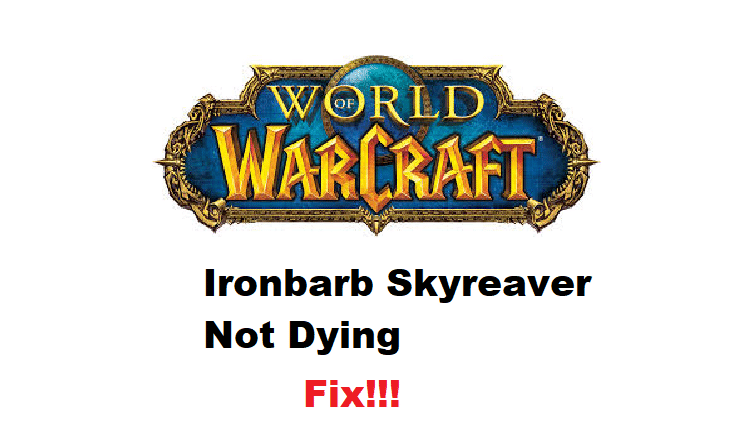