Two of the most highly popular add-ons when it comes to fighting enemies and bosses specifically are Deadly Boss Mods, known shortly as DBM for convenience, and Bigwigs.

Both of them are helpful in their own great ways, and lots of players that enjoy using World of Warcraft add-ons seem to be quite divided over which one of the two is actually better.

If you’re having similar problems and can’t decide which one is better, consider checking out the comparison we’ve given below to make it easier on yourself.

Bigwigs vs DBM for WoW Legion

What Both Add-Ons Do

Both of them are meant to assist players while they fight certain enemies in specific raid encounters. The way they help is similar but completely different at the same time.

DBM directly tells players about what’s about to happen and makes them take action as quickly as possible. This is quite helpful, especially for those that are somewhat inexperienced at the game and need a helping hand in dealing with some of the relatively tougher encounters of a raid.

As for Bigwigs, it is an add-on that only tells players about what’s happening. It tells players about the abilities of enemies in an encounter and which one they’re about to use, but it doesn’t tell them exactly which commands they’re supposed to be using.

Instead, it simply gives them an idea of everything happening around them, keeping players prepared for surprises and giving them the necessary info they need to take action on their own.

How Both Add-Ons Work In-Game

Both DBM and Bigwigs work similarly in the game. They provide warnings and information in the same way, by showing players messages on the screen or by alerting them through sounds and other cues.

There are differences in this specific regard too. Bigwigs simply have small messages and little dings that it uses to notify players about things. This is convenient and usually easily understandable.

Messages on the screen and the bars which notify players about attacks are also quite prominent. Some complain that this is a little too much and can distract players while they play, while others think that it’s great because it helps them take action in a swifter manner.

Regardless, there are still some UI changes that can be made that are obviously helpful in their own way. Still, it must be said that Bigwigs is the better option in this specific regard, if not any other. 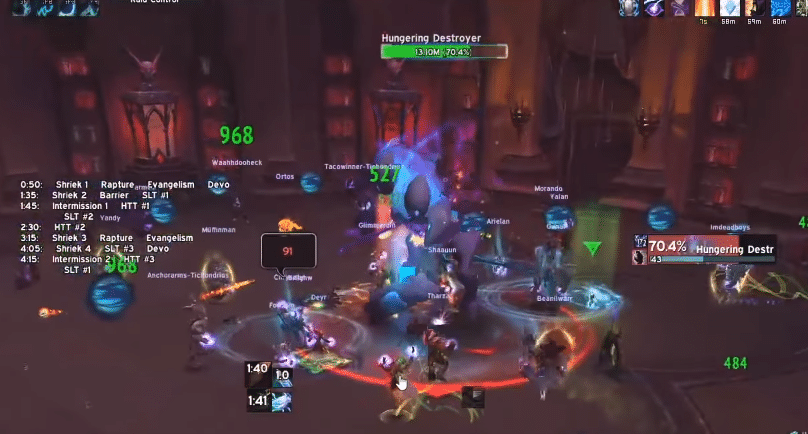