Every single character class in WoW has its own unique set of specs. A spec in WoW is the term used to refer to the specialization of a character. Players get to choose their characters’ specializations by deciding the abilities that they use and the way that they play the game itself.

Two of the most popular specs which can be tried out for the warlock are the destruction and affliction specs. You’ve probably heard all about these if you’ve been playing warlock for long. Here’s a comparison to help players decide which of the two is worth checking out if they can’t seem to make their decision.

Destruction vs Affliction in WoW

The first thing that a player needs to know about these two is how they work. Both are good for dealing with damage. But as every player already knows, there are many different ways in which damage can be dealt.

This is where both destruction and affliction are completely different from one another. As its name might suggest, affliction is a spec that is all about “afflicting” enemies with effects that can do DoT (Damage over Time) to slowly take out either entire groups or a single target.

Destruction, on the other hand, is a spec that is all about causing as much havoc and chaos as possible by destroying the nearby environment. The destruction caused in all of this can be used by a warlock to their advantage with the right abilities, allowing them to easily deal with multiple enemies at once in high bursts of damage.

Now that users know exactly what both of these specs are capable of, let’s get down to their utilization and how both of them are capable of helping in combat. Affliction is one of the most popular specs in the entire game because of how well-balanced it is.

It may not be the greatest in terms of AoE Damage (Area of Effect Damage), but it is still decent enough in this department to be considered good for use. As for single target damage, there arguably isn’t any spec for the warlock better than Affliction.

Destruction is also decently balanced, but not as well as an affliction. The former is easily one of the best when it comes to taking out multiple enemies through lots of AoE damage. It is also great in some other regards, making it a versatile enough spec. However, it is not good for single target attacks, making it a less preferable spec when facing off against bosses.

Ease of Learning and Mastery

Destruction is actually one of the easier specs for the warlock to get the hang of. While it can be difficult to master, it is still easy enough to understand the basics and then builds upon your skills from that point. Affliction on the other hand is difficult right from the get-go, making it a rather challenging spec to make the most out of without hours of practice. 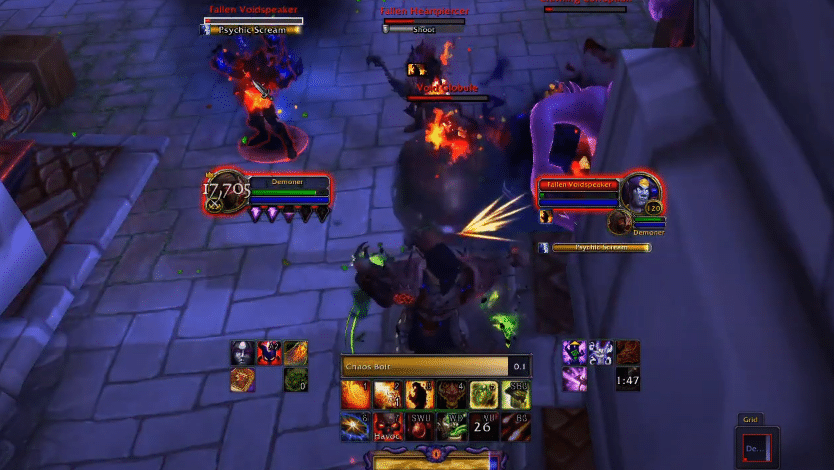