A relatively common issue that has been popular for quite some time now among WoW players is the ‘’Not Enough Memory’’ error that the game provides users when they try to play the game. There’s usually a simple reason for this problem, and this reason is that your RAM is completely full. But there can be other reasons for the issue as well, even when there’s enough memory to go around. Here’s how to solve the not enough memory error in World of Warcraft which might be causing your game to crash and preventing you from playing.

Restarting the computer that you’re trying to play WoW on is a good way to fix this issue. It is recommended that you try this out first before any further troubleshooting and researching, as it can work perfectly at times. This solution is especially recommended if you’re device has been consecutively running for several hours.

It is recommended that you disable a majority of the applications that are running in the background while you’re trying to launch and play WoW. These eat up a lot more memory than you’d think at times and are usually what cause this issue. If you’re completely sure that you’re RAM’s total memory is suitable for WoW but it still presents this error, then background applications are most likely the culprit.

The main applications that you have to watch out for are applications such as VPNs, Proxies, and more of the sort. These are usually running all the time and they can cause problems like the one you’re currently facing if you have them enabled while playing World of Warcraft. Simply disable them for the time being and make sure they aren’t running in the background anymore. Now open WoW to see if it runs without the error message this time.

If there are no other applications running in the background but you’re still being provided the error message whenever you try to boot up WoW, it is possible there is a memory leak. These suddenly take up lots of space within your RAM and completely fill it at times as well. Just open up the task manager while launching the game and see which process suddenly takes up too much memory at once. This should help you identify the cause and get rid of it with ease.

If the game suddenly crashes and you’re presented with the not enough memory error message after you’re playing and inside one of the realms, it’s likely that some files are corrupted. These are causing issues with your memory and making it so that you face this problem. The solution is pretty straightforward. All you have to do is reset the UI of World of Warcraft and then restart the game. It should no longer present the error anymore. 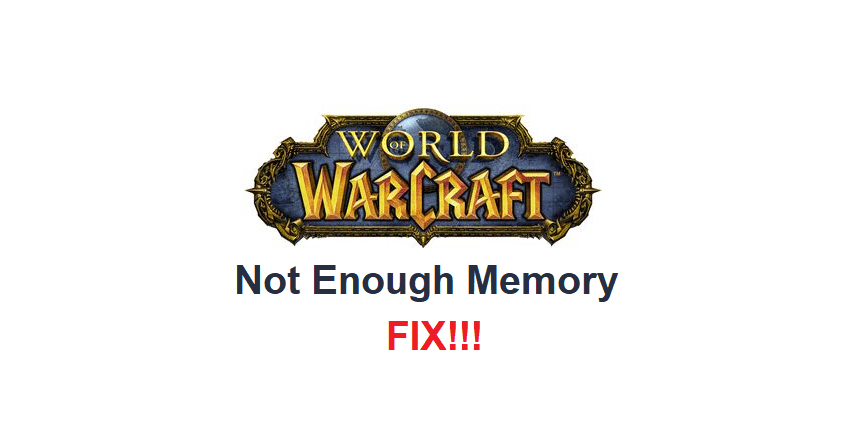