Overwatch is already popular as it is when it comes to gameplay because of the amazing and unique playstyle the game has. On top of this, Overwatch also offers a wide variety of characters to select from. With 31 characters already in the game and more being added every few months, Overwatch provides its players with a considerably large roster. What people find impressive about this roster is how different the game has made each character feels.

Every character has different gameplay. With unique weapons and abilities that can completely change the match in your favor if used right, Overwatch and Blizzard have done an excellent job with their characters. All of these characters also have their own backstories that make the players feel for the characters while also connecting the character with the rest of the Overwatch world. On top of this, every character also has 100+ cosmetics that you can unlock and equip to improve their appearance.

These cosmetics include skins that change your character’s outfit, voice lines, and emotes you can use to express yourself in-game and a bunch of sprays for no real reason other than fooling around during some quiet time. More of these cosmetics are added to the game with the introduction of every new event. These cosmetics are usually based on the event for which they came out with.

However, not every character is lucky enough to get cosmetics in every event. Some characters get cosmetics while a few are left out with nothing, which in turn, angers the players that play as said characters. Not everyone likes newly introduced cosmetics, especially in recent times as players have started to say that cosmetics are just lazy and not very interesting.

One cosmetic in particular that gained a lot of attention, was the lifeguard skin for McCree. Jesse McCree is one of the most popular characters of Overwatch. The outlaw has made a name for himself, with even people that have never played Overwatch knowing about him. His lifeguard skin is a fan favorite, but it also raised a few eyebrows when it first came out. The lifeguard skin shows a lot more… “skin” compared to others which is why many people were surprised to see it as Overwatch is well renowned for it being family-friendly, apart from the children screaming and swearing at you of course.

The Lifeguard McCree skin came out in 2018, with the introduction of the second summer games event. The skin features Jesse McCree wearing nothing but a towel and shorts, not to mention a cute little straw hat. The skin is arguably one of the best in-game and despite the controversy, it brought along with it, the skin remains a fan favourite even now. The skin is also one of the only special legendary skins in-game that have its own unique voice lines with it. Instead of saying his occasional, “Woah there!” or “stop right there” when he uses his Flashbang, McCree will instead say, “no running” as a little nod to how lifeguards don’t allow civilians to run near the water. Along with this, McCree will also change his ultimate voice line from the iconic “Its High Noon! Draw” to “Its High Tide!’’.

One thing in particular that fans still can’t figure about the skin, is the rewording of McCree’s belt that usually says BAMF to SAMF. Although many players thought BAMF meant “Bad A*s Mother F***er” when the game initially came out, it was never likely to mean that as the game is family-friendly. Instead, Michael Chu (lead story writer of Overwatch) revealed that the words are short for “Bullets and More Flashbangs” but there has been no official statement about what SAMF means. 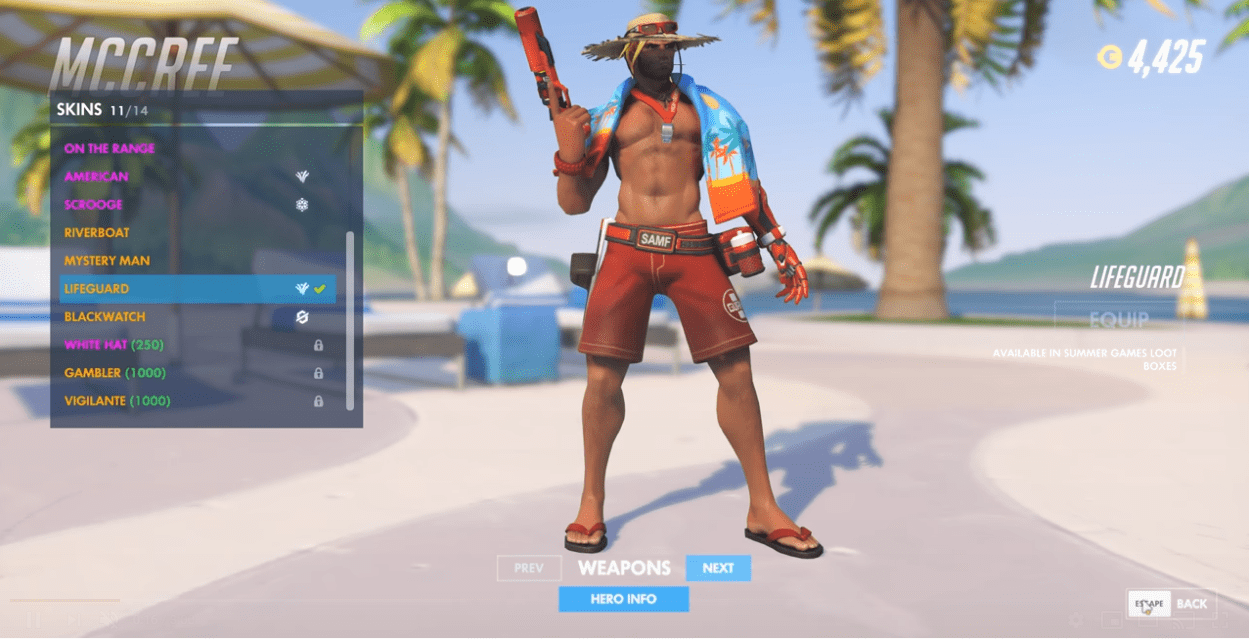