There are exactly two very important places in all of Minecraft where players will be spending almost all of their time playing the game. These two places are known as both the Nether and the Overworld.

If you’re looking at how to manage the said difference between the Nether and the Overworld, here’s everything that you need to know about the two.

The first thing of all worth knowing is that there is a huge difference between both the Nether and the Overworld in Minecraft in terms of their overall size.

The Overworld is the main location in the entire game. It is the world of Minecraft itself where players start off their journey. This includes all the forests, mountains, water, and just about anything else players will be able to see during the initial stages of the game. To put it simply, it is the default dimension of the game.

The nether, on the other hand, is something completely different. This specific dimension was added very recently, only during the earlier half of 2020. This is especially recent compared to the Overworld that’s been around all the way since the start, back when Minecraft first released in 2011.

It is a much more unforgiving and dangerous area filled with unique items as well as enemies. It was introduced to the game as a part of one of the biggest updates in Minecraft history. As the Overworld is the main dimension of the game while the Nether is a dimension added in an update, regardless of how big said update was, it is safe to say the former is much larger.

Because of this, the way the distance is calculated in either dimension is also very different. As the Nether is exactly 8 times smaller as compared to its default counterpart, this means that travel is much quicker inside of it as well.

To put it in the simplest way possible, distances in the Nether are proportional by a 1 to 8 ratio when it is being compared to the Overworld. You can use this smaller distance to get around specific areas in a much quicker and more convenient fashion, provided that you have the necessary knowledge and items of course.

There is no particularly helpful way of navigating in the Nether with the help of a map, which is another reason why knowing this 1:8 ratio difference between distances in the Nether and Overworld respectively has its advantages.

For example, when you know the exact distance ratio, you also know that moving one block to the right in the Nether is the equivalent to having moved it 8 blocks to the right in the Overworld. There are other ways of converting this distance and using it to one’s advantage too. 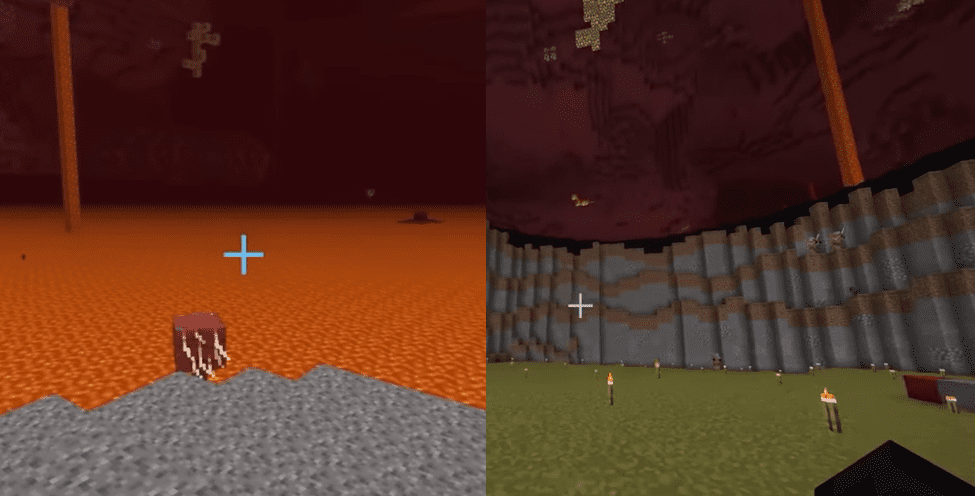