Minecraft is one of those rare games that has managed to hold onto its popularity throughout generations of players. It’s actually kind of hard to believe that it has been over a decade now since the game was first released and that the original players are still playing.

We can only assume that this is because, if you are creative enough with it, you never really run out of new and interesting stuff to do.

To add to the entertainment, there is also the presence of plenty of different mobs – each of which will interact with you in different ways. Some of these will be entirely negative, whereas some will not do any harm to you. Parrots definitely fall into the latter category here. They will never try to attack you.

However, they are also not exactly the easiest to found, and always hang out in the jungle biome. But they are also really useful at times, imitating the sounds of other more hostile nearby mobs. So, you can effectively use them as a security system if you want to.

That being said, the fact that they can just take up residence on a player’s shoulder and stay there can end up getting a little irritating after a time. So, if you’ve found yourself getting annoyed by a parrot you can’t seem to get rid of, this little guide is for you!

How To Get A Parrot Off Your Shoulder in Minecraft?

The best thing about a parrot in Minecraft is that they can sense the presence of mobs from 20 blocks away. So, they can be a useful alarm system while on the move. Once you tame them, they will then sit on your shoulder and come along everywhere you go.

They are easily identified and come in 5 different colours: grey, green, red, blue, and cyan. These colours match the real-life colour variations based on the various colourings of macaws found in the wild.

Every parrot will have 6 HP and will not have a weapon. This means that it won’t attack enemies for you, and it won’t ever attack you either. All it does is warn you.

How do parrots act in Minecraft?

To tame a parrot and have it sit on your shoulder, the key is to feed it with foods that it likes: pumpkin seeds, melon seeds, wheat seeds, and beetroot seeds.

Once tamed, you can either make the parrot stand up or sit down. If you make it sit down, the parrot will not follow you around the map. There is also the added bonus of being able to teleport it around.

Parrots, like the polar bear and skeleton horse, have no baby form. They do not breed either. Despite being relatively easy to tame, there are foods to avoid giving a parrot.

If you give a cookie to a parrot, it will die. They also have the strange trick of dancing to jukebox music, despite not being able to walk on the land. On water, they will flap their wings and avoid drowning.

How To Get A Parrot Off Your Shoulder in Minecraft

Parrots leaving of their own accord

There are a few situations that you will come across that will make your parrot leave of its own accord. If you are riding a horse, they will leave your shoulder. The same happens if you die. The same goes for drowning, sleeping, and taking damage. They really don’t like lava either.

Even if you have fire resistance and step into lava, the parrot will leave your shoulder in that moment and burn up in the lava. They will also leave your shoulder if you are dropping from a large height. Of course, there are also a few commands you can use in place of putting your life in danger.

Commands to get a parrot off your shoulder 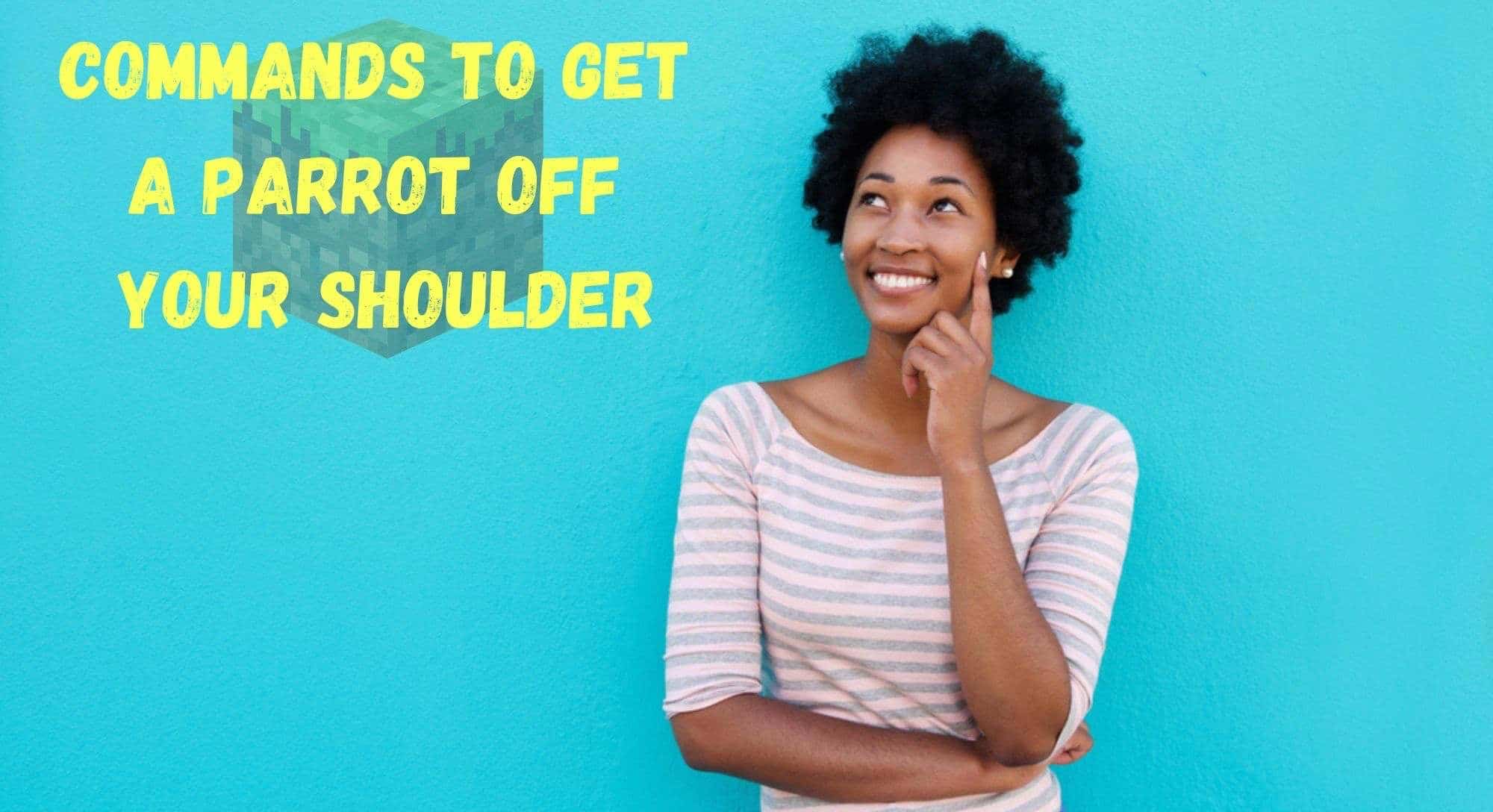 If you didn’t want to go any of the routes mentioned above, using commands is probably a much better choice for you. There are several different commands that pretty much do the same thing. You can choose between “releaseshoulders”, “parrotrelease”, or “prel”.

Use any one of these commands and then follow it up with either the right or left button (whichever shoulder the parrot is on). There is also the option to simply transform the parrot into eggs.

For this, type “parroteggify,” “pegg,”and again follow it up with the direction that matches what shoulder the parrot is sitting on. It is important to note that this can only be down in town areas of the map.

Are parrots useful in Minecraft?

This has been the cause of a bit of debate. Parrots are actually quite rare, and their primary function is to just make you aware of approaching mobs. Notably, it takes different seed to tame a parrot, and these same resources can be used to tame either cats or wolves.

Unlike parrots, wolves will actually join your side in a fight against a mob. Cats will scare away creepers if you tame them. To us, this makes them far more useful as companions.

We also find that parrots can cause a decent amount of confusion too. Because they imitate the sounds of nearby mobs, it is easy to assume that you are already getting attacked and get worked up for nothing as a result.

On top of that, they also don’t join your side in a fight against mobs that are attacking you – in fact, they don’t even keep them away. All that being said, it’s still pretty cool to walk about with a parrot on your shoulder.

With Minecraft, you can decide to approach everything tactically and use every resource available to you to its fullest potential. However, that isn’t the way everyone wants to play it. Every now and then, you just want to act like a pirate for a bit and rock a parrot on your shoulder. And there’s nothing wrong with that!

1 thought on “How To Get A Parrot Off Your Shoulder in Minecraft?”