It’s almost impossible to believe, but Minecraft has been around for over a decade now. Initially released in 2011, the game has managed to lure in new players year after year, all the while still keeping its old fanbase entertained. It really is quite the coup from Mojang Studios.

Nowadays, there are still updates to the game, with millions of players still engaging with it across a large variety of platforms. Of course, there have also been a few nifty new versions released to keep everything fresh for the players. There’s been the Story Mode, Dungeons, and Minecraft Earth.

Today, we are here to talk about a relatively old feature – one that first showed up in update 1.13. Known better to some as “The Update Aquatic”, this update packed a whole range of new things into the game. Of these, Buried Treasure is the one we are going to discuss today.

For those of you who have never come across it before, this addition allows the player to find brown treasure troves, buried deep into the ground. These will be absolutely jammed full of all sorts of rare loot.

On an average find, you will get tools, armour, weapons, and precious materials. It is also the only way that you can get your hands on the “Heart of the Sea” without using commands or playing on creative mode. So, it’s quite a find!

How Deep is Buried Treasure Minecraft? 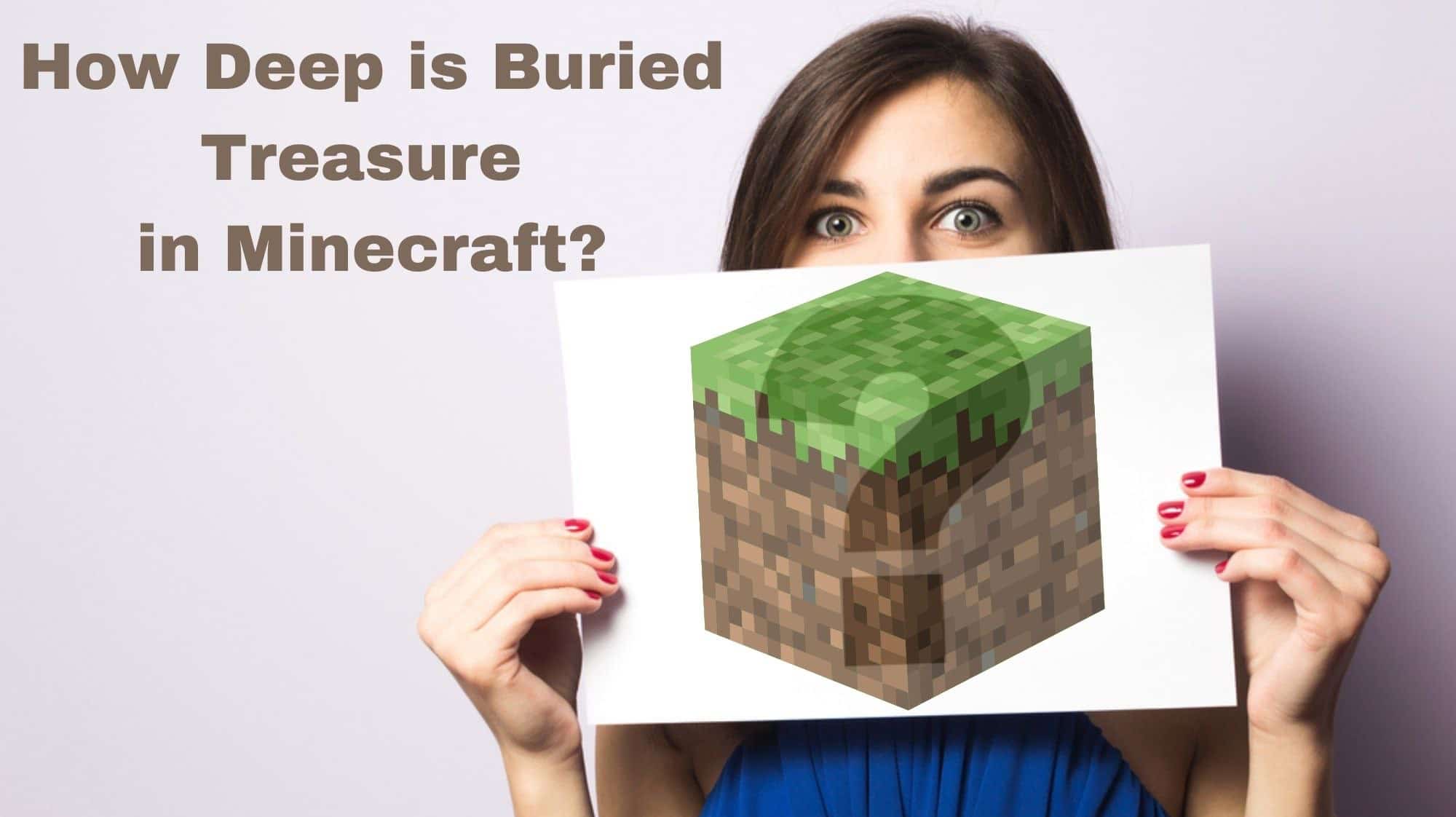 This is a tough one to answer, but we will do our best to show you all of the tricks we can. First up, Buried Treasure can show up in all biomes.

They can be located relatively easily by using an Exploration Map. If you want to know where to get these, looking in and around shipwrecks and around other sorts of underwater ruins is a great place to start.

Unfortunately, figuring out how deep Buried Treasure is buried is still an unknown science. However, we can help you narrow it down quite a bit! If you want the know-how, here’s your chance to get it!

How Far Down is Buried Treasure in Minecraft?

The first thing you need to know about finding Buried Treasure in Minecraft is that we will perhaps never know exactly how far down it will show up. But this doesn’t mean that it is totally random. It will have some spots where it is far more likely to show up than others.

Sometimes, these chests will show up in really easy to find locations – even as close to the surface as one or two blocks under the surface. We all love it when this happens because it saves a crazy amount of digging.

On occasion, they can be so far down that they take an age to unearth. We’ve also come across them 20 blocks down, simply sitting on the surface, or just out in the open in a cave. This can make finding treasure seem a lot harder than it really is.

How to find buried treasure

Like in the real world, buried treasure is hard enough to come by. This is especially the case when you consider that not every map will lead you to what you are looking for. They can also lead you straight to other rare structures instead of treasure.

All we can do is make sure that you aren’t making any of the classic mistakes that players the world over make. The first thing that you need to make sure of is that you haven’t missed it entirely by digging beside it.

A lot of players will only dig directly under the X. However, you do also need to dig around the X too. So, make sure you are clearing a decent-sized patch when you are excavating. Plenty of players have reported positive results from trying this.

In terms of how far down to go once you have broadened the search area a little, there are a lot of different superstitions and theories out there. Of these, we have a few that we can also back up a little. Quite a few people have noticed that they tend to find Buried Treasure roughly 40 blocks down, and always in an underground cave.

Others have noticed that they also tend to not be located under rock. However, they can be found under sand and gravel. Of all of the theories out there, the one that seems to hold true the most is that they won’t spawn in an area where they are exposed to sunlight.

As you can see, these chests have some pretty unusual spawning styles. As of yet, we haven’t come across a rule for them that works in every single case.

The best you can do is to learn as many of the common spots as possible. Once you have that down, there is also a technique that will make sure you don’t miss anything one you’ve landed on the X. That technique is as follows: