Minecraft now allows any of its players to host their own multiplayer servers in which they have an entire world to themselves and any other player they wish to play with from all over the world. These private servers also give you the option to invite your own friends, something that is highly appreciated by fans of the game. The private servers are known as Minecraft Realms. While they are a loved feature of the game, these realms definitely aren’t perfect. The feature has many different errors that players can encounter, and we’re going to be discussing one of the most popular errors today.

How to Fix Minecraft Realms Error 500

Sometimes when you or one of your friends try to get into your Minecraft realm, you’ll be encountered by an error which says Internal Server Error 500. This error is quite common and it is caused by quite a few reasons. We’ll be discussing a few of these reasons today and provide you with solutions so that you can start playing your Minecraft realm again without facing any issues.

Before you take your time to start troubleshooting and learning all about complicated fixes to the Minecraft Realms error 500, you should check to see if there are any issues on Mojang’s part. There are many a few times when the issue becomes quite popular and a lot of players encounter it. You should ask your friends if they’re encountering it or look up whether or not other players are facing it at the moment. You can also directly search about the status of their servers as there are many different websites out there that can detect when a specific game’s servers are down.

If the problem is indeed with the servers, all you can do for the time being is wait for Mojang to fix it. If you don’t prefer to wait for it, there is an option to contact Mojang as well. You can enquire their support about the issue if there is a server issue and they should be able to fix it in time for you to enjoy playing in Minecraft realms after an hour or few.

This problem frequently occurs when players try to access a Minecraft realm while using resource packs or mods. There are some resource packs and mods that mess with the game and will not allow you to play in a realm. If this issue started to occur after you installed a specific mod or a resource pack, it is highly recommended that you get rid of it by uninstalling it. If you don’t know which specific resource pack or mod is causing the problem, you should uninstall all those that you installed after the problem became frequent. If that still doesn’t work, you can try deleting all your mods and resource packs, or take a quick look at the fixes below instead.

If even deleting the mods and resource packs couldn’t help you start playing in realms again, you should switch to the default settings. The issue also occurs when players tinker with the settings of the game and it is likely that this is the reason behind your problem as well. If you can remember exactly which settings you changed before the error started occurring frequently, revert those back to default. Otherwise, set all of them to default and try to get into a realm again. Your issue should be fixed now.

Lastly, all that’s left to make sure is that you’re using the most recent version of Minecraft. Updates for the game are released frequently, and it’s likely that you missed one because the launcher didn’t automatically install it for you. Check to see if there’s an update and install it as soon as possible. The issue should now be fixed and you shouldn’t be witnessing Minecraft realms error 500 for a while. Just try this or any of the other fixes we have listed above and you’ll be back to playing online Minecraft realms as soon as you want. 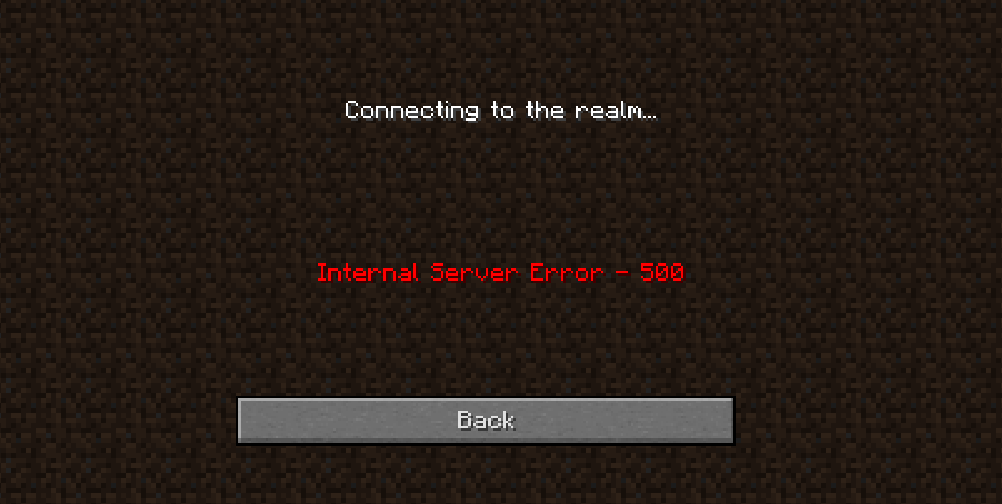