One of the more difficult challenge stages in the entire game is challenge number 20, which is named Fjord 3. This level is particularly difficult due to the fact that there isn’t much time to complete it and a single bad move can be more than enough to make the level impossible to complete. If you’re one of the many people struggling with Challenge 20, take some help from the guide below in order to make things much easier for yourself.

How to Clear Challenge 20 in Merge Dragons? 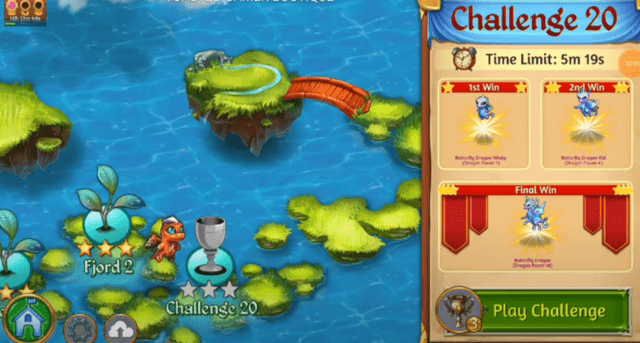 Challenge 20 is certainly difficult, but everything is made much easier when you know what to do and when to do it. Follow the step-by-step guide given below in order to clear Fjord 3 with ease.

What Rewards does Challenge 20 Offer?

There are some good rewards that you can get for completing Fjord 3 in Merge Dragons! You can get Dragon Tree Seeds or a Spotted Dragon Egg. There’s also a chance to get a Dragon Tree Sapling, which can be very helpful for specific things.

Challenge 20 may be difficult, but it’s not impossible. It’s ok if you’re struggling with the stage as there are many players that are facing the same problem. Just take a look at the guide above and you won’t have to struggle with completing the level anymore.