One of the most popular extra features in Merge Dragons! are the challenge levels. These are extra levels that are greatly similar to the main stages. They are relatively new to the game, as they were added in the Version 2.0.2 update of Merge Dragons and are a great way for players to earn very helpful rewards to help them progress in the game. However, completing these challenge levels is much easier said than done.

All of the challenge levels in the game must be completed under a set amount of time. This means that players must be at the top of their game when playing these levels. A player’s full focus is required to complete these levels and the slightest of errors are more than enough to ruin the whole level. Some of these challenge missions are more difficult than others. One difficult level in particular is Challenge 29.

How to Clear Challenge Level 29 in Merge Dragons 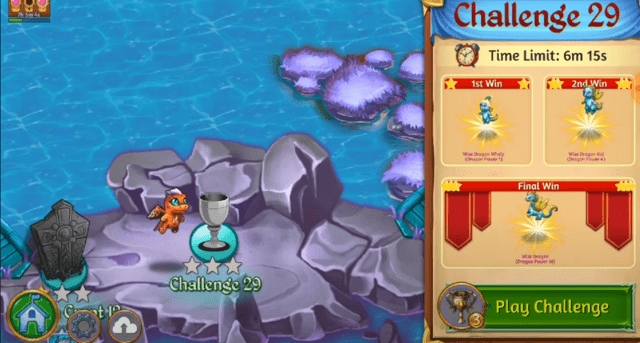 Challenge level 29 is named as Craven Crypt 13. It is actually one of the shortest challenge levels out there, but that doesn’t mean that it is less difficult to clear as compared to the others. In fact, it’s the other way around due to the fact that you don’t have much time to clear the mission, and everything is Super Dead Land. Like most levels, the main goal of Challenge 29 is to restore the Destroyed Gaia Statue. Here is a detailed guide that can help you do this.

As you can see, Challenge 29 is actually quite easy. You mainly have to perform similar steps over and over again in order to complete it. The only downside is the fact that there is a lot of Super Dead Land that you have to heal and there isn’t much time to do so. However, you’ll be more than fine if you just follow all the steps given above in a hurry.

Just like most other levels, Challenge 29 also has 3 extra goals that players can complete for extra rewards. These three goals require you to destroy 4 Zomblins throughout the course of the level. On top of this, you’ll also have to heal all the land in the entire level and create 2 Doom Crosses in order to fulfill all 3 extra objectives and get the goal stars. This may sound difficult, but the step-by-step walkthrough given above will help you complete all three of these and get the extra rewards.

Speaking of rewards, there are exactly three different possible rewards that players can get for completing this challenge level. These rewards include a Life Orb, Grimm Chest, and a Rock Dragon Egg. All of these are helpful and have their own different uses.