Minecraft’s multiplayer may be a neat and very important addition to the game, but you’ll likely face quite a few different issues as you play multiplayer more and more. One of the many errors which you’ll face is that flying is not enabled on this server error in Minecraft, which is also one of the most annoying issues in the game. You’ll get kicked for flying in any server even if you didn’t actually fly. This is a common issue and luckily we’ve been able to find a few different solutions which you can learn more about through the text below.

Flying is Not Enabled On This Server Error in Minecraft

The first and arguably the best fix for this issue can be accessed through the server.properties file of Minecraft. All you have to do is go and find this file on your PC and then open it. You’ll have to choose a method of access if you haven’t accessed this file below. It doesn’t really matter as long what you choose as all the options presented to you will likely be suitable for this fix. You’ll now have to locate a line which says ‘’allow-flight=false’’. You can also add it into the file yourself if you’ve searched for quite some time but still weren’t able to locate it, as it could be that it simply isn’t in the file.

Now you’ll have to make some adjustments to this specific line by replacing the ‘’false’’ with ‘’true’’. Make sure that the resultant line spells ‘’allow-flight=true’’ and that there isn’t any extra space at the end as the solution won’t work properly. Also, remember to restart the game after editing and saving this line into the file. Once you perform all this correctly the issue should no longer occur and you should be able to play multiplayer Minecraft without getting kicked for flying, even when you didn’t.

This was actually a bug in the older versions of Minecraft which was fixed later on. Despite this, it still occurs on these versions randomly and can be quite annoying. It is recommended that you try switching to one of the newer versions, preferably 1.6 or higher, and then try playing multiplayer again. The bug didn’t exist in this version or the ones after it, meaning that you should likely not face it anymore after you switch to them.

There are quite a few mods that cause problems if you’re trying to play multiplayer Minecraft, but there are a few that can actually help you as well. There are a couple of different mods that you can use to stop facing this issue, and it is recommended that you try them out if all else fails. One example is the ‘’Gotta Go Fast’’ mod for Minecraft, which was able to help out a lot of players who were frequently encountering this error. 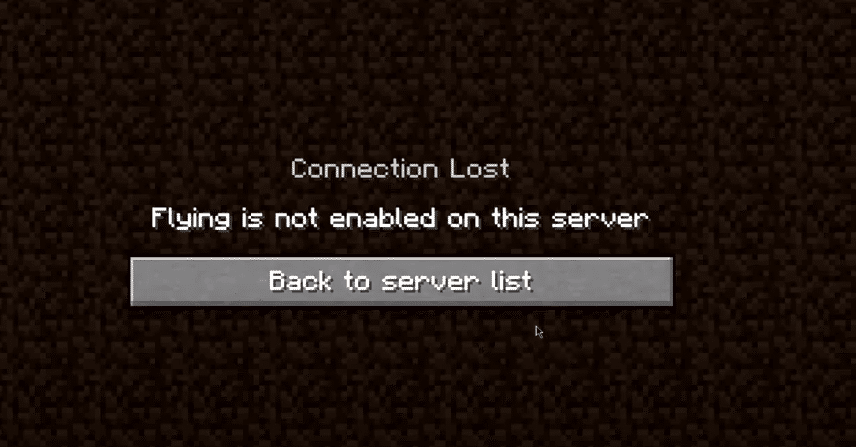