The Elder Scrolls Online (ESO) is an MMORPG game developed by ZeniMax Online Studios, whereas published by Bethesda Softworks. After the massive success of Skyrim, the game was released in 2014. ESO is set in Tamriel, basically meaning that the game is somewhat connected to the universe of Elder Scrolls.

In this game, the player gets to experience non-linear gameplay, with tons of quests, events, as well as being able to freely roam and explore the rich world. Also, just like the other Elder Scrolls titles, the game features various races from which the player can choose from.

How to Fix ESO Not Launching on Steam?

A lot of users have mentioned how ESO won’t launch from Steam. According to them, whenever they try to launch Elder Scrolls Online through Steam, it shows the running message for a few seconds before closing. No matter how many times they try, the very same thing happens.

In this article, we will be taking a look at this issue and telling you exactly what you can do in order to fix this. We will be doing this by listing a few troubleshooting steps that are known to resolve ESO not launching on Steam. You can find all of these steps mentioned down below:

Weirdly enough, some users have reported that you actually need to go through the setup again even after downloading the whole game from Steam. They mentioned how Steam won’t really install the game for you. This leads us to believe that the same case could be with you. If so, then you will need to locate the local files that Steam has downloaded for you, and go through the setup by running the setup file.

This is possibly the most likely step to resolve your problem, as we have seen countless users fix the problem by following this step. What you need to make sure of is that you download and install the game in the same directory as where My Documents is located. This is most usually your main drive, which should be the C drive.

Unfortunately, if you find that you have not enough space in the drive, then you will either have to merge two drives or delete some files to get the required space.

Is ESO not launching on Steam? If it isn’t, then we strongly recommend following the set of instructions attached with this article. Doing so should help you in troubleshooting and fixing the problem. 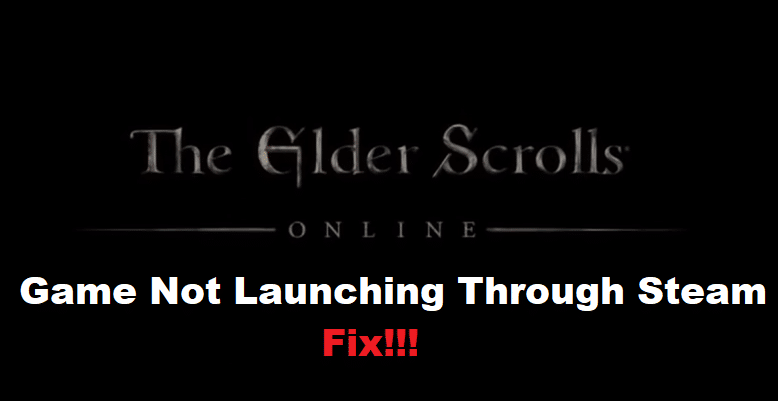