Till now, the primary reason why users bought different fans for their PC was to manage the temperature on their system. Especially, if you are overclocking or putting excessive load on the system. To avoid thermal throttling on the PC it is crucial to keep the temperature as low as possible. The most cost-effective and viable solution for managing temperature is to install fans inside your system.

That is why we will be covering features of the Corsair ML series and the Corsair LL series. Both of these are reliable and will also enhance the visuals of your PC design. You can control the RGB effects along with the RPM of these top-quality PC fans.

The Corsair ML series is famous for its performance, If you are making a custom PC with the intent of overclocking it then the ML series will be the perfect choice for you. Gamers across the globe are in love with the performance of the Corsair ML series. Up till now, the only feature missing in these PC fans was that there was no RGB feature. Meaning that you will still get high-quality performance but visuals won’t be good enough.

Luckily, Corsair took notice of the customer feedback and after numerous requests from gamers, they decided to add the RGB feature to the Corsair ML series. Meaning that you will not get the awesome visual effects along with the performance. The RPM on the ML series can be set to 2400 spending upon which size of fan you’re busing. The practicality of these PC fans is off the charts, the overall build is durable and they won’t break out on you any time soon.

The unique feature about these fans is the magnetic levitation bearing. What it does is minimize the friction during the rotation of the fans. As the friction is minimized you will get even more efficiency out of the system. Moreover, that makes the fan quieter, and will barely be able to hear any noise even if you’ve multiple fans installed on your computer. There are not many other brands that can compete with the Corsair ML series and these are some of the quietest fans that you can buy off the market.

The airflow is managed quite efficiently and your system won’t run into any temperature-related issues if you have enough fans installed. Unless you are pushing the envelope with overclocking and putting excessive load on your system, you won’t have to install a water-cooling system on your PC. Even though water colling is far superior to your traditional PC fans, it can be quite expensive and harder to manage. Moreover, most users don’t even know how to install the water-cooling feature on their PC. Which makes PC fans a viable and budget-friendly option.

Along with the box of Corsair ML fans, you will also get the lighting node pro that you can use to control the RGB features on your ML fans. After linking the fans with the node, you can just use the PC application to tweak the features on your RGB fans to match your light strips or any other color combinations. Performance-wise, these fans are unmatched and the Corsair LL can’t be compared to the ML series.

The fans from the Corsair LL series fans are some of the most visually attractive fans that you can install on your custom PC. The main focus is on the RGB feature and unlike other fans, you will get brighter lighting effects from these fans. However, that does not mean that these fans won’t give you any performance. They are still one of the top-performing PC fans that you can buy but the specs might short when compared with the ML series. The difference in performance might not be substantial enough for most gamers but it can still have some impact on the performance of your system.

The unique feature about these fans is that you will get RGB lighting on the inside ring as well as the outside ring of the fans. You will be able to customize your fans with different color combinations of these two light rings. The diffuser also works perfectly to provide uniformity in the RGB lighting feature of the LL series fan. While the ML series fans are known for their performance, the LL series is known for the visual effects. So, depending upon which aspect you prefer more, you can buy either one of the two Corsair PC fans.

You can still control the speed to minimize the airflow during idle times and maximize it when you are putting the burden on the computer. These fans are also very quiet but specs-wise the ML series fans quieter. There is no magnetic levitation feature in the Corsair LL series which is why the RPM is a bit less as compared to the ML series of Corsair fans. Gamers who are looking for better visuals always prefer to buy the LL series over the ML series.

You will still get the lighting node pro along with the LL series fans that you can use to manage the RGB feature on these fans. Some users might say that the ML fans are lacking in the RGB department but that all depends on the reason you’re buying the fans for. If you just need the visuals and don’t have an issue with managing temperatures then the Corsair LL series will suit you better.

All in all, both of these fans are quite good and there are few differences when you compare the performance and the design in general. Users have pointed out the LL series fans are a bit smaller when compared side by side with the ML series fans. The overall frame on both series fits nicely into your PC and you won’t be hearing any vibrating noises coming from the PC. So, either go for the ML series for performance or the LL series for enhanced visuals. 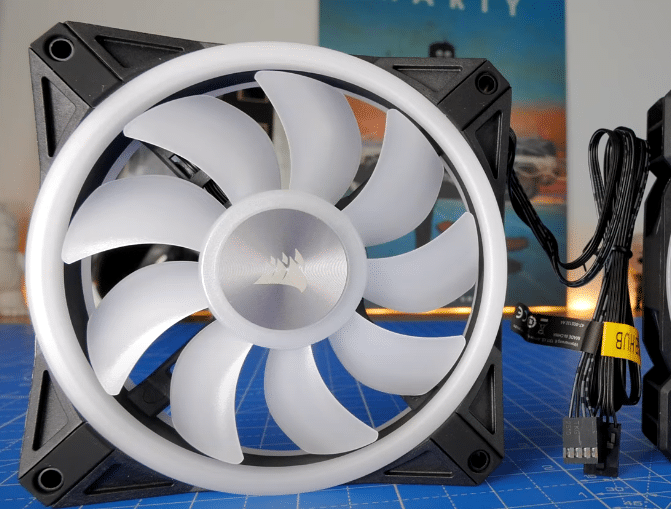