Golf Clash is an incredibly popular Golf game for smartphones. The game features a wide range of clubs. The clubs are divided into different categories. Each category has plenty of clubs and each of them is used for different purposes. Also, every club has a different stat associated with it. Some have good accuracy, while others can cover larger distances.

If you’re wondering why the clubs are split into so many categories. It entirely depends on the situation. In Golf Clash, you will find yourself in various situations where you will need a club with a specific attribute to progress.

Short irons are one such category of Golf Clubs that a player can use. Actually, the golf clubs are subcategorized just like real Golf. Short irons are mostly used when a player needs to make the ball cover smaller distances. For example, players will mostly use short irons when the ball is near the hole. A short iron is ideal for such situations.

This also implies that certain stats, such as power is not really needed for short irons. Still, knowing the right short iron in the right situation can win you the match. 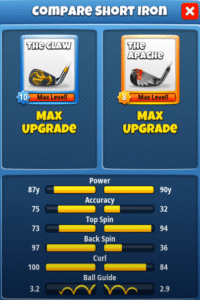 Now, power might not be the ideal stat for a short iron. You will mostly be using the short iron at incredibly short distances. Still, we have mentioned that we are going to mention the best short iron for each stat.

Taking the power stat into account, there is no better short iron than the Apache. It covers a whopping 90 yards distance in power. Thorn makes a close competition to the club by coming in second, covering around 86 yards. 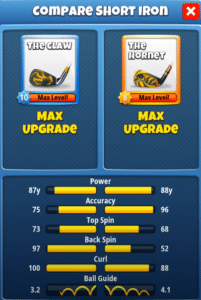 For the best short iron club for accuracy, the Hornet will be our first pick with 91 accuracy. The Kingfisher falls short and comes in the second position with 83 accuracy. Here, the Apache is absolutely the worst short iron. 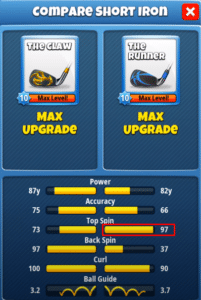 Similar to power, topspin isn’t an important stat when it comes to short irons. But for the sake of it, we’ll be covering it. The Runner has a massive abundance here, with 97 topspin! The Apache comes in second with 51 topspin. The other short irons fall short in this trait. Even the Apache has a huge difference for topspin when compared with the Runner. But then again, topspin isn’t exactly important for short irons. 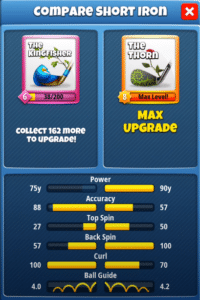 Backspin is one of the more important stats for short irons. The Thorn is the clear winner here with 85 backspin. Unfortunately, neither of the clubs come even close to the Thorn here. The Kingfisher comes in second with 40 backspin. That is less than half of what the Thorn has. 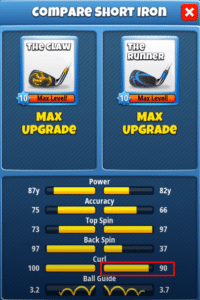 Curl is a moderate stat for short iron clubs. By moderate, we mean to say there are only a handful of situations where you will need this stat. The Runner comes in first here, with 68 curl. The Kingfisher falls behind, having 57 curl. Keep in mind, curl can be very important in a few situations. 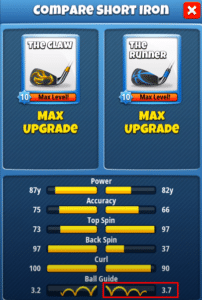 We’ll be using the process of elimination now. Now that we have mentioned the best short iron for each stat, let’s move ahead and start eliminating these short irons based on their scores. The short irons will be eliminated if their stats on a certain aspect, or overall are too low.

We won’t be counting power here as you will simply not need it in short irons. Although for accuracy, the Apache has a 27 accuracy. The club makes it barely safe, so we won’t be eliminating it. The Kingfisher has a 0 topspin which makes it pretty bad in many situations. Likewise, Thorn has 8 here, which makes a single bar of topspin.

There are quite a few bad short irons for curl as well. But we won’t be eliminating clubs based on power, curl, and topspin. For the more important stats, accuracy is probably the number 1 here. As mentioned above, the Hornet is the winner here. It is the most accurate short iron in Golf Clash.

In Backspin, we could see that the Thorn was the absolute winner with a whopping 85 score. Backspin is one stat that sets Thorn apart from other short irons. For the ball guide, the Runner and the Thorn were very close to each other. Both only had 1 0.1 difference so we’ll consider them both.

If you want the ultimate answer on what the best short iron is, it’s the Thorn. The short iron has just come with too many pros. The Hornet is also a pretty solid short iron as it is the most accurate short iron in the game. Unfortunately, the Hornet falls short in almost all the other aspects.

1 thought on “Golf Clash: Best Short Iron Clubs to Use”