As most people already know, Minecraft is mostly about building and crafting. In order to build, players must find and craft multiple different items. Each particular item in the game has its own use and is used to build different things.

Of course, as players keep collecting more and more things in the game, they’ll start to run out of space. This is why Minecraft provides players with the option to create storage systems such as chests and barrels.

Both chests and barrels are very helpful in Minecraft. They can be used to store all the items that a player currently doesn’t need. This means that players won’t have to discard any supplies in order to make room for other items.

Barrel vs Chest in Minecraft

While both barrels and chests serve the same function, they’re a little different from one another. Barrels have their own distinctive advantages and so do chests. If you’re having a hard time deciding which one you should choose, here is a comparison between both storage systems to help you out.

A barrel is more convenient as compared to a chest. Barrels are cheaper to craft, making them better for survival mode. On top of this, barrels can also be used when there is a block placed directly over them.

Chests are quite cheap to craft as well, however, barrels are cheaper in comparison. On top of this, you cannot use a chest if there is a solid or transparent block placed directly over it. This is why barrels are considered the more convenient option in Minecraft.

Both barrels and chests have the same storage capabilities. Both containers are capable of storing 27 items without any modifications. 27 items are good storage capacity and are very helpful if you mine and collect a lot of items.

However, chests can have more storage than barrels due to the fact that they can be turned into double chests. A double chest is capable of storing 54 different items at once which obviously makes them a great storage system.

Barrels in Minecraft are considered immovable objects. Players cannot move them with the help of pistons or any other device. On top of this, players can’t attach barrels to llamas, donkeys, and other animals.

Chests can also not be moved with the help of pistons or other devices. However, players can attach a chest to their donkey. This allows players to transport all the contents of their chest from here to there without any troubles. Chests can also be attached to a few other specific animals.

As you can see, both barrels and chests have their fair share of distinctions. They are quite similar to one another but are also completely different in a sense. Both of them have their own advantages and disadvantages and you can’t call either one better than the other. Some players prefer barrels because of their convenience, however in the end, it comes down to everyone’s personal choice. 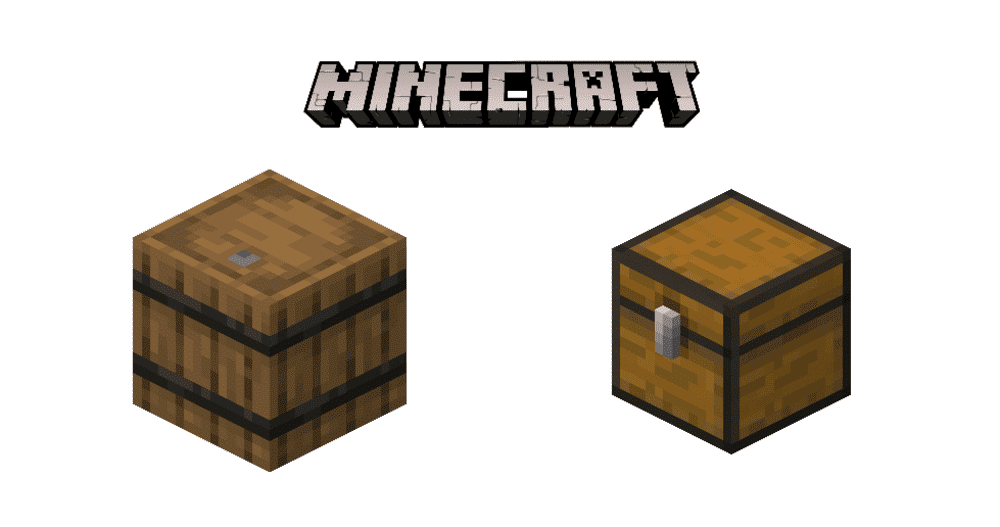