Merge Dragons is a game like none else. This game focuses on constructive abilities rather than destructive and allows you to make the most of your day. You get the magical powers to merge different things together and create something more magical, more extraordinary for you. That is why the game is appreciated by lots of people around the globe and the popularity is increasing each day. Like most major mobile games, the game is free to play and download for everyone. It is available on App Store and Play Store for download for free, but there are some in-app purchases as well.

Every game got some in-game currency. Most of the new games we are seeing these days, they tend to have two types of currencies. One of them is commonly earned by completing multiple levels of the game and making your progress towards the goal. While there is another type of premium currency that is not so easy to earn and unlocks some of the most premium stuff for us. That is how these games work these days and if you are wondering what gems in merge dragons are, here is a detailed explanation.

Gems are the premium currency in Merge Dragons that will be used to speed up the game progress. You can gain some premium rewards, get instant recovery, and unlock some premium stuff in the shop that is not available otherwise. The hard part is that this premium stuff only accepts gems and cannot be unlocked using the regular coins that you have in your chest already. If you are wondering where can you earn these gems, here is a brief idea of earning these gems for you. But before that, you must know that there are three levels of gems that you can earn and use in the game.

These levels of gems are Epic, Legendary, and Mythical. Each level holds its own value. You can collect these gems to spend later in the shop or merge them together to create a higher form of the gems for your chest. 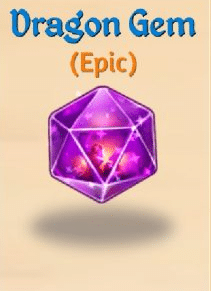 This is level 1 Dragon Gem. The rarity of this gem is epic and it is worth a single gem. However, you can use this gem in the store directly or merge it together with Dragon Gems to create a Giant Dragon Gem. 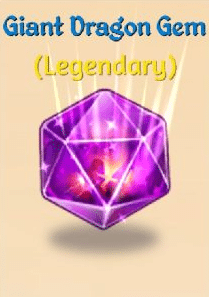 Giant Dragon Gem is at the second number in the chain. Its rarity is legendary in the game and it is pretty hard to get. You can get this gem by merging the dragon gem in your chest. It is worth 5 regular dragon gems and can be used in-store or to be merged together. 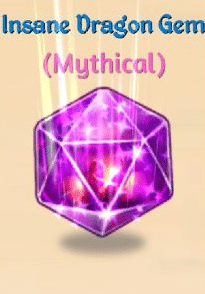 The third and ultimate level for Merge Dragons Gems is Insane Dragon Gem. It is very very hard to find and the rarity is Mythical. You will have the chance to find it if you are playing the game on the luckiest day of your life. But there is nothing to be worried about as you can also create this gem by merging 15 regular gems or 3 Giant Dragon Gems. It is worth 15 gems.

You can store an unlimited number of gems with you, but that is not what they are meant for. You need to spend these gems to unlock the levels and different kinds of stuff. That comes later, the primary question that we all have is where can we get these gems and there are two options for that.

Every game got some in-game purchases to support the developers. That is one of the best ways to show love for the developers of your favorite games. You can buy these gems against the real money and use them as your in-game currency. These gems can be bought using your google play account, apple pay account, or any other credit card you might have for online purchases. Once you have purchased these gems, you will get access to them in your chest to do with them as you please. You can buy as many gems as you want and there are no limits on that.

This might be a worthy investment for a better and interesting gaming experience for you.

Earn them in the game

You can also earn these gems in the game. While there are chances that you might not get as many gems as you might want or need but it is definitely worth giving a shot. You need to click on the dragon stars and they will award you a gem most of the time. You will usually get Dragon Gem, or Giant Dragon Gems from these stars if you are lucky. You will need to merge Giant Dragon Gems to get insane dragon gems and collect them later.

Where you can spend these

Now, we have a fair idea of how and where can we earn these gems and what they mean. But it is more important that we know where can we use these gems so we can spend them wisely in the game. Some of the examples where you can put these gems to good use are:

Camp Quests have a waiting time that we all hate. We don’t want to wait for hours before we can get past them. Gems are a great way to speed up that process. You can pay the price of time in forms of gems and it will either speed up the process for you or unlock the cam quest instantly.

We all love those dimensional jars with super cool items. Now you have a chance to open those jars using gems. These gems will be the price for opening the jar and you get to keep the surprise reward that is being held in the jar you open.

Event shops are a worthy investment like festivals as they allow you a chance to get your hands on premium stuff. You can use these gems as a currency in these event shops as well.