A player’s skill is always important, but getting a better golf club could make him even better in Golf Clash. Many players don’t have much idea about golf clubs. They waste most of their resources on upgrading a golf club which then turns out to be terrible.

This is where this guide comes in. We will be recommending some of the best golf clubs to use and upgrade. This guide will help you avoid wasting coins. It will also help you focus on the right golf clubs.

Quite a few players think that using the early game golf clubs is the best option. They will keep using that particular golf club until they get their hands on the best golf club. This will only work for a short period of time.

Right after Tour 6+, it will become almost impossible for the player to progress. This is why upgrading a golf club is very important. What’s more important for the player is to upgrade the right golf club. It will last you until you finally get the ultimate golf club. Here’s an image to help you understand:

Most people prefer to max out a particular golf club. The Extra Mile is a great example of this as it can last the players all the Tours till Tour 9.

The golf club can be accessed early game. Playing any low tour will give players a much better chance to drop cards for the club. Will this guarantee anything?

Unfortunately, no. Playing lower tours will not give you any better chance of getting club cards. Unlocking all these chests will take the same amount of time on higher tours as well. As a matter of fact, you will actually slow down your progress by having a smaller number of cards, and coins.

All the Best Clubs in Golf Clash

We’ve made a complete list of all the best golf clubs in Golf Clash that you can use and upgrade. We’ve ranked them according to their use. For each category, we’ve mentioned the best golf club for the job. To make things even easier, we went ahead and mention what you should use before you get your hands on any of these awesome golf clubs.

If you own any of these golf clubs already, make sure to put them in good use! All of the best golf clubs in golf clash, along with a brief analysis are given below:

As mentioned before, the Extra Mile is a great golf club which is obtainable early game. It has a pretty decent range. Try upgrading this golf club until you find Thor’s Hammer or Apocalypse. 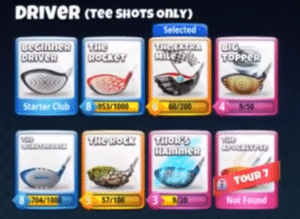 Many players have seemed to find them around level 7. It might take less or more time for you. Just keep using the Extra Mile until then. If the opponents start to get tougher, use an upgrade on the golf club.

Thor’s Hammer is a lot better than the Extra Mile. Make sure to swap as soon as you get it. Apocalypse should be the final choice for you. With incredible range and precision, the Apocalypse is the best driver in the game.

While playing Tour 2, you will get access to the Viper. It is a pretty good wood in the game and can be upgraded multiple times. After progressing to Tour 6, you will have the option to unlock the Sniper. Although it is a pretty solid golf club, you will also need to put some work on Big Dawg. There are a few holes in tournaments, that will require more distance than what using the Viper will give you. 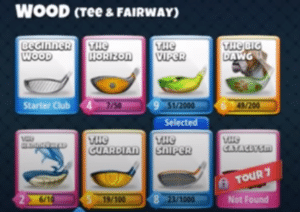 Along the way, you will come across some other woods. Ignore all of them and keep upgrading the Viper. Before you get the Sniper, make a few upgrades till level 9 which will make its stats on par with the other woods. The Sniper is significantly better than the Viper, but you will need to stick with the Viper for most of the journey.

Unfortunately, in the early game, not even a single short iron is worth spending upgrades. Even if you absolutely have to upgrade one, we’d recommend keeping it to a bare minimum. Recently, Kingfisher had an amazing buff. After getting the first useful short iron which is the Thorn, get either Kingfisher or Hornet. 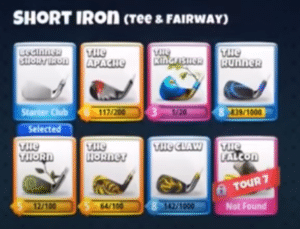 Hornet’s precision is slightly better than Thorn but both are pretty useful. On the other hand, Kingfisher can act as an alternative to Hornet.

After testing out various golf clubs, we’ve reached the conclusion that only three golf clubs are worth your time and coins. The first one which you can unlock is the Goliath. You will have to use this long iron for quite a while. 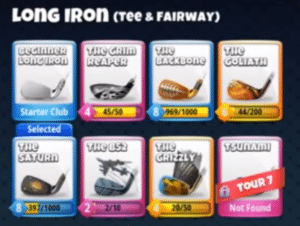 After progressing to a certain point, you will have enough resources to unlock the Backbone. You will still need to use Goliath from time to time for longer distances.

As for the best long iron for end-game players, Saturn will be the ultimate choice here.

The Dart is one of the easiest wedges to get in early-game. Keep using it as a wedge until you get to Tour 7. 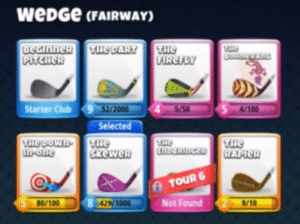 From here on, the Skewer will be the better golf club. The Dart is also pretty good, but for the end-game players, the Rapier should be the absolute wedge.

Regrettably, there aren’t any good choices for rough irons in golf clash. The Roughcutter is probably the first impressive rough iron in the game. Use it until you get to Tour 7, or 8.

Soon after, get the Razor. It is a pretty solid rough iron in golf clash. For Tour 9+, the Nirvana is the best rough iron to use.

Before getting to Tour 3, don’t even think about getting a sand wedge. You will unlock the Malibu in Tour 3. Although the distance isn’t anything great, it will feature amazing accuracy. 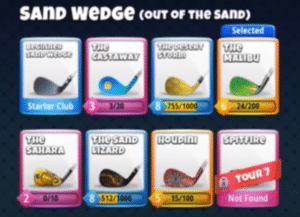 For the latter half of the game, SpitFire is probably the best sand wedge. You can unlock it after you’re at Tour 7.