Discord has many different unique features and mechanics, but one of the simpler and most used ones is the app’s voice call feature. The reason why voice call in Discord is a lot more popular than voice call in a lot of other applications is that Discord offers a lot of customization options to make the experience much better. There are all sorts of different features to use in order to optimize the voice chat feature to your liking.

One example of this is the echo cancellation feature, which eliminates acoustic feedback. In simpler words, your voice sounds clearer to the people you’re speaking to through Discord and they don’t hear any echoing sounds either. Setting up the feature isn’t as easy as it sounds though, as many people have problems when it comes to getting echo cancellation on Discord to work. Here’s what to do if you’re one of many users struggling to get the feature to work.

How to Fix Discord Echo Cancellation Not Working?

The first thing that’s recommended is that you turn echo cancellation off for a while if you have it enabled but it isn’t working. After turning it off, it’s recommended that you restart your device, or at least close the Discord application.

Now turn Discord back on and enable the echo cancellation feature again as well. The feature should now be working as intended. This is a method that managed to work for many people and should help you as well. But on the off chance that it doesn’t, move on to the other solutions given below.

Echo cancellation tends not to work so great on its own, and users have to end up enabling a few other settings too in order to get the feature to work. If you have echo cancellation enabled through the Discord settings then it is also recommended that you tamper with the settings a bit more. Specifically enable both ‘’noise suppression’’ and ‘’auto determine input sensitivity’’ features. Doing so should be enough to get the echo cancellation feature to work as it is intended to. Once you’ve enabled these settings, try to voice chat with someone again and see if your voice echoes this time.

If you’re a PC user that’s using the desktop app to voice chat with people, specifically on a Windows PC, then the issue could be caused by the system’s own settings. To check whether or not this is in fact the case, go to the sound settings of your PC. You can do so by simply pressing the Windows button on your keyboard and then typing sound settings in the menu that appears.

Now go into the playback tab and check your default audio device and default communications device. Both of these should be set to the exact device which you’re using to talk in Discord, otherwise, you’re bound to still hear that echoing sound. Once you set this device to the proper setting, you should be able to get echo cancellation working again. 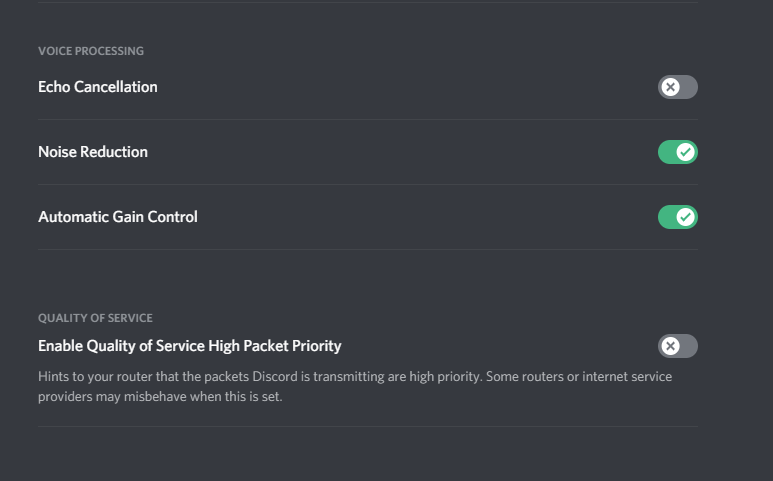